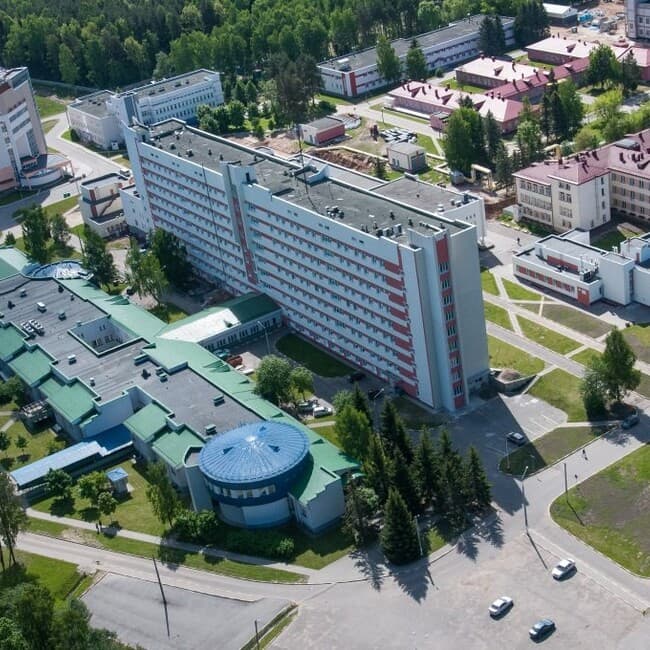 State Establishment «Republican Scientific and Practical Center of Oncology and Medical Radiology named after N.N. Aleksandrov» is a leading oncology center of the Republic of Belarus which offers a full range of services in the field of diagnostics, treatment and education.

The center provides treatment and examination services for the citizens of the Republic of Belarus on a free basis, and also offers chargeable medical services for foreign citizens.

There are 1750 specialists working at the center, among them there are 389 physicians, 150 of which are of superior expert category and 91 of them are of the first category. The staff consists of 8 Associate Professors, 24 Doctors of Medical Sciences and 75 Candidates of Medical and Biological Sciences, 11 professors and a corresponding member of the National Academy of Sciences of Belarus.

Specialists of the center have developed unique treatment methods having no analogues in CIS countries and worldwide, such as the following ones:

Specialists of the center are well-skilled in the treatment of all kinds of malignant tumors applying different methods of surgical, radiation treatment and chemotherapy. Diagnostic units are equipped with modern appliances, which make it possible to make a diagnosis in a very short time even in the most complicated cases.

Annually, more than 20 thousand patients are treated at the center, more than 15 thousand operations are performed, more than 1,5 million diagnostic and laboratory investigations are carried out; more than 1 thousand of people use the services of consulting and outpatient unit. The center has a wide range of modern diagnostic tests, there is a molecular-genetic laboratory of carcinogenesis and PET-CT-diagnostics, also there are 20 modern surgery rooms.

Radiation therapy is carried out with the application of the following methods:

Application of linear accelerators of the latest generation Truebeam STx and Trilogy means the following:

Application of the most advanced brachitherapeutic system “Flexitron» produced by Dutch company «Nucletron» means the following:

The main treasure of the Republican Scientific and Practical Center of Oncology and Medical Radiology named after N.N. Aleksandrov is its staff of like-minded professionals with a high level of knowledge, whose energy and all strengths are put to achieve the main goal – successful struggle against malignant tumors.

Directions of our work:
Ask a question